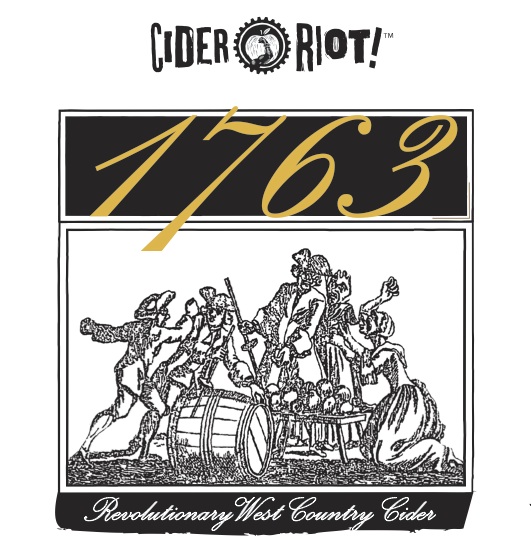 PORTLAND, Oregon- FOR IMMEDIATE RELEASE-
When English Prime Minister John Bute imposed a cider tax in 1763 the people of the West Country rose up in a revolt known as the Cider Riots. 250 years later Cider Riot!, a small scale cidery in Portland’s North Tabor neighborhood made its first cider, fittingly entitled 1763 Revolutionary West Country Cider. The 2013 vintage was highly acclaimed, declared in the top three best ciders in Oregon by Willamette Week, and garnering a silver medal at the Great Lakes International Cider and Perry Festival.

Introducing 1763 Vintage 2014
Yamhill County grown Yarlington Mill, Harry Masters Jersey, Dabinett, & a few French cider apples lend robust tannins, and rich flavours to a cider that’s worth fighting for. Fermentation from natural yeasts from the apple skins is augmented with wine yeast, for a full, dry cider with 7.5% alcohol by volume, unfiltered in the tradition of a Somerset scrumpy.

An estate cider made with only apples from the legendary White Oak Cider in Yamhill County, Oregon, 1763 is the cider that started it all. Cider Riot! founder and cidermaker Abram Goldman-Armstrong learned to tell good apples from bad at White Oak in high school and college, taking inspiration from Alan Foster, a Northwest cider visionary, who planted his initial orchard of English cider apples in 1989.

We invite you to cellar 1763 for special occasions, and recommend pairing it with bold blue and cheddar style cheeses. It is the perfect accompaniment for a traditional ploughman’s lunch. Best served at 46-52oF, 1763 pours a hazy golden amber, and will open up as it warms.

The 2014 vintage of 1763 is limited to 100 cases, and available in fine Portland area bottleshops and grocers starting August 19th, and in Washington bottleshops in early September.