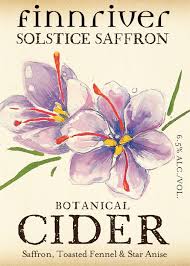 Chimacum WA— January 10th 2020, Solstice Saffron Botanical Cider returns to Finnriver Cidery!
Finnriver is pleased to announce our new sourcing relationship with Portland-area saffron grower, Tanya
Golden. Each year at the winter solstice, Finnriver begins the fermentation of our late winter botanical
craft cider— Solstice Saffron. This bright seasonal release features organically grown apples infused with
toasted fennel and organic anise pods and — new this year— saffron grown in Oregon. This lightly
carbonated cider, one of five in Finnriver’s seasonal botanical series, is released in late winter and is
generally available through March.
Saffron, first cultivated in ancient Greece, originates from a flower called crocus sativus—commonly
known as the “saffron crocus,” and is considered one of the world’s most rare and costly spices.
Growing saffron requires exquisitely careful hand-harvesting methods and a great commitment of
attention and intention. Finnriver seeks to find regional sources for their seasonal cider ingredients and
when their previous local saffron grower lost his crop due to deer impact, they were delighted to learn about Tanya’s new endeavor. Located just outside of Portland in North Plains, OR, Golden Saffron Co. was founded in
2018 by visionary Tanya Golden. Tanya has over 20 years’ experience working as an herbalist and 3rd generation
sustainable agriculture farmer, while taking pride in and staying connected to her indigenous ancestry. From
laying the foundations of the greenhouses and crop bedsto hand picking each stem with love, Tanya brings a
conscious joy and passion to her work and community offerings. You can learn more at her website: goldensaffronco.com. “We deeply appreciate the direct connections that growers have to their land and to their crops, and to the stories that have carried them into agriculture. The Botanical Cider series has brought us into relationships with a range of wonderful folks throughout the region who provide organically and thoughtfully
grown or wild-harvested ingredients for these seasonally released fermentations,” said Crystie Kisler, co-founder of Finnriver Farm & Cidery.Solstice Saffron is available for purchase in Finnriver distribution territories around the country, onsite at our Cider Garden Taproom on Washington’s Olympic Peninsula, as well as online at Finnriver.com.
The Finnriver crew farms and ferments on 80 acres of organic fields and orchard in the Chimacum
Valley, along a salmon stream on the north Olympic Peninsula of Washington. Their mission is to
reconnect people to the land that sustains us and to grow community. They seek to create deep-rooted
and fruitful connections at their farm-based taproom and rural gathering space. Finnriver’s farm and
orchard is Certified Organic and Salmon Safe and the company is a Certified B Corporation, seeking to
make business a force for good. Learn more at finnriver.com