We were greeted at Cidrerie Traditionelle du Perche in a very tour-centric manner. After a brief introduction and a few off-the-bat questions we were guided into a small auditorium for a video presentation. It contained your standard harvest, press, and bottling information designed for casual cider tours.

The orchard contained 23,000 trees that they grew certifiably organic. During the previous year, they had harvested 300 tons of apples from that crop. The orchard is planted on a sandy type soil. It yields a smaller quantity in fruit but they are assured that what they lose in quantity is made up for by more robust sugar content. In the orchard they utilize IPM with the installation of ten nesting boxes per acre for bluetits. The birds eat 30,000 insects annually. 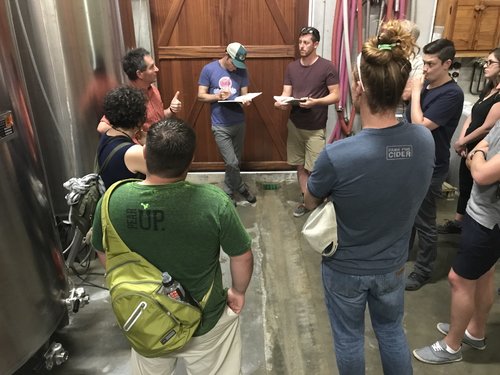 OUR CIDERMAKERS ENGROSSED IN SOME SERIOUS LEARNING.

Harvest takes place starting in mid October and runs through the end of December. They used to hand-harvest and sweat their apples, but have gone by the way of the rest of France it seems, and mechanically harvest. By that method they collect ten tons a day and work through the trees three to four times as the fruit matures over the season to collect windfalls. Apples are taken straight to the press where they are rinsed, sorted, then washed again before pressing. The pomace is macerated for only one hour. They press 3 tons of pomace a day using a bladder press. Average yield is 50 L per ton. On this orchard they recycle their pressed cakes as feed for cattle. 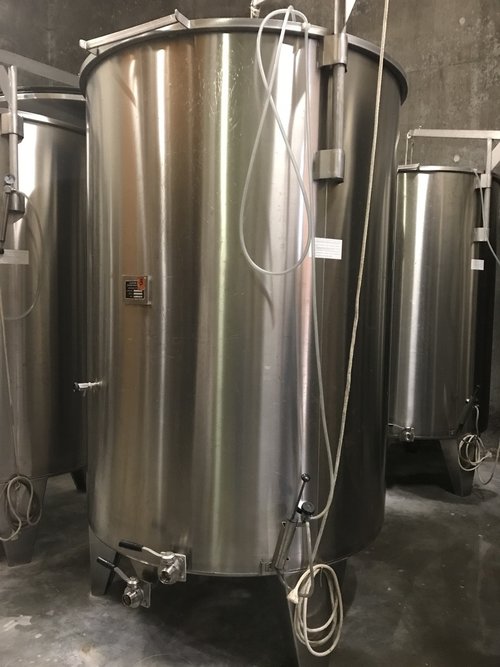 VARIABLE-CAPACITY TANKS ARE USED IN ADDITION TO FIBERGLASS, HERE.

In the tanks they then add their PME at 7 mL per 100 L & calcium chloride at 1 kg per 1000 L, and wait for the Chapeau Brun to form. It was interesting to note here that they claimed to wait 1-3 weeks after adding PME before adding the calcium chloride. Our host cider maker says he SMELLS when the cap has risen. From here the cider ferments for 2-4 months. They use no external energy to keep the tanks cold. I was surprised to find that they had a brand new facility, but only used partial cellaring by keeping their tank room underground, to keep the fermentation room cool. Sometimes it’ll be 5 degrees C, and other times 20. If they find it’s too warm and cannot achieve a successful keeve, they will just leave the apples on the ground longer and harvest at a later date. It’s also interesting to note here that in order to slow fermentation, they have actually racked their cider twice in one day, but will not filter. The purpose being that they want the yeast to work and remove the nitrogen, not just remove the yeast load.

Here is where we first encountered the idea of tall, slender tanks being crucial to keeving (so it has been claimed). According to our host, if the tank is taller than two meters, the cap will not form. A narrow tank is essential. If it is too wide or tall, the forming bits will float around and break up. Some people swear by this. Other people have said it’s complete nonsense.

During fermentation they aim for an FSU drop of 1 point per week. If it goes faster than that they will use that cider for calvados. Finished cider is bottled and stored for 3 months before selling. They look for 2-3 bars of pressure in the bottle, equivalent to 3-5 points drop in gravity in the bottle. They send the bottles to the lab and test for yeast but not nitrogen content.