Olympia, WA – December 27, 2016 – Fish Brewing Company has announced today that it will open a new Pub & Eatery on the Grand Plaza at The Shops at Point Ruston in Tacoma, WA. Craft beer fans can expect the same commitment to quality and relentless innovation the company has embodied since 1992. 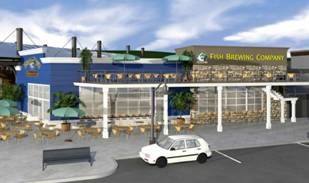 President Sal Leone notes, “It’s an exciting time here at Fish Brewing Co. With a long-standing history of showcasing our products with quality food at our award winning pub in Olympia, we are excited about bringing this experience to Tacoma.  Point Ruston is becoming one of the area’s premier mixed-use destination showcasing quality restaurants, a variety of retailers, a cinema and a future hotel convention center on the shores of the Puget Sound. This new location is a perfect opportunity for Fish to expand our great tasting craft beverages and food experience to one of Tacoma’s most vibrant neighborhoods.”

The restaurant will be approximately 6,900 square feet with a seating capacity of 360 guests including a second story terrace and outdoor seating. It will feature a similar menu as the Olympia Fish Tale Brewpub including award-winning handcrafted beers from Fish Tale Ale, Leavenworth Biers and Spire Mountain Ciders as well as six wine taps featuring Piccola Cellars and a selection of fine spirits. Construction is in process, and the new Pub & Eatery is scheduled to open in the summer of 2017.

“This is a great opportunity for Fish Brewing and we are excited to be in the heart of Tacoma.” said Matt Lisowski, Executive Vice President of Fish Brewing Co. “We’re looking forward to the opportunity to connect with the community of Point Ruston and release our newest beer, Ruston Way IPA, debuting in our new Pub & Eatery. We are excited to bring the message of Fish Brewing to Point Ruston, and continue to develop our award winning craft beverages in the Pacific Northwest.

Founded in 1993, Fish Brewing Company is owned by over 400 beer drinking consumers, who pooled their resources to build a landmark brewery in Olympia, WA, which is known for its quality water and artesian wells. Fish Brewing uses when possible locally sourced Washington ingredients. Fish Brewing produces hand-crafted beers and ciders under our three core brands: Fish Tale Ales, Leavenworth Biers, and Spire Mountain Cider, which can be found in 20 states and internationally, both in bottles and on draft. Fish Brewing produces award winning spirits under the brand name Vitis, which are available throughout the Pacific Northwest. Fish Brewing operates a full service an award winning pub in Olympia, WA, which was featured on the Food Networks show Diners, Drive-in & Dives, and a new taproom in Woodinville, WA. Fish Brewing believes that fresh beer and cider, fine food, and enduring friendships are what life in the Great Pacific Northwest is all about. For more information visit www.fishbrewing.com.